Dropping in on The Donut King 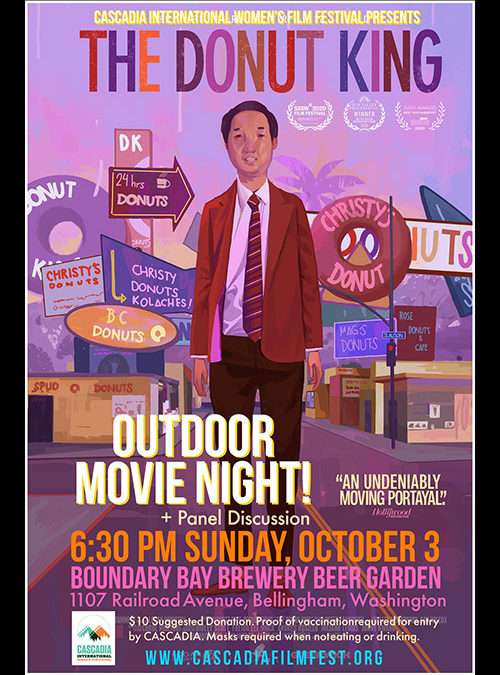 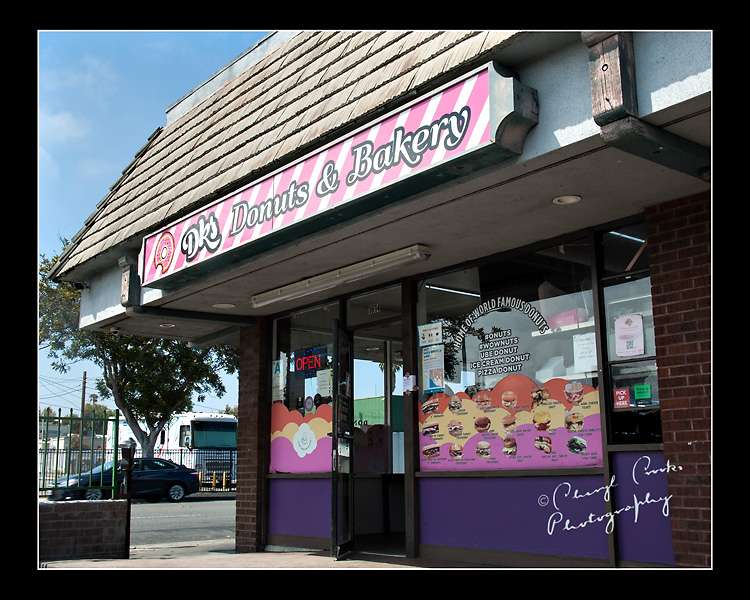 DK’s Donuts and Bakery sits on a corner in Santa Monica, CA. where it’s been in operation since 1980.

I made a quick trip over Fourth of July weekend this summer to visit my son and cousin in Los Angeles. While there one evening, my cousin and saw the documentary, “The Donut King.”

The film, directed by Alice Gu, is the rags to riches story about Ted Ngoy, a Cambodian refugee who, shortly after arriving in Los Angeles in 1975, learned to bake donuts and proceeded to build a multi-million dollar donut shop empire that challenged even Winchell’s dominance in Southern California. Ngoy sponsored hundreds of Cambodians to the U.S. who then learned the business and eventually ended up with donut shops of their own. Ngoy’s is a remarkable story, full of ups and downs, but inspiring nonetheless and a fine example of one immigrants’ surprising contribution to America. 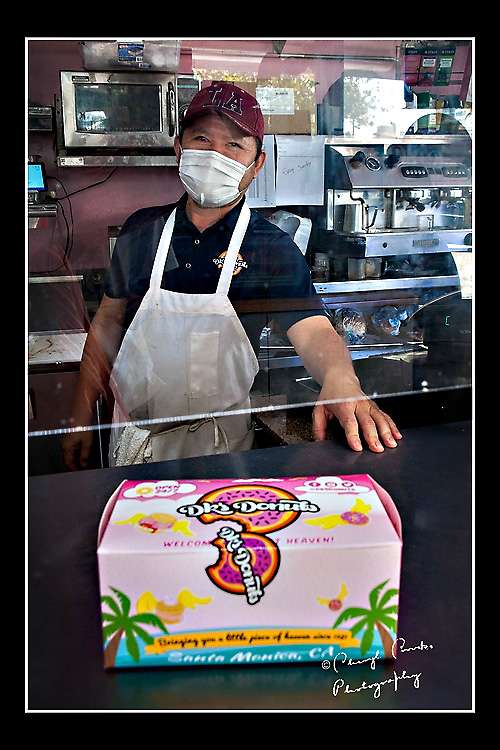 The aproned man behind the counter was ready to serve whatever I selected. He knew exactly what movie I had seen. 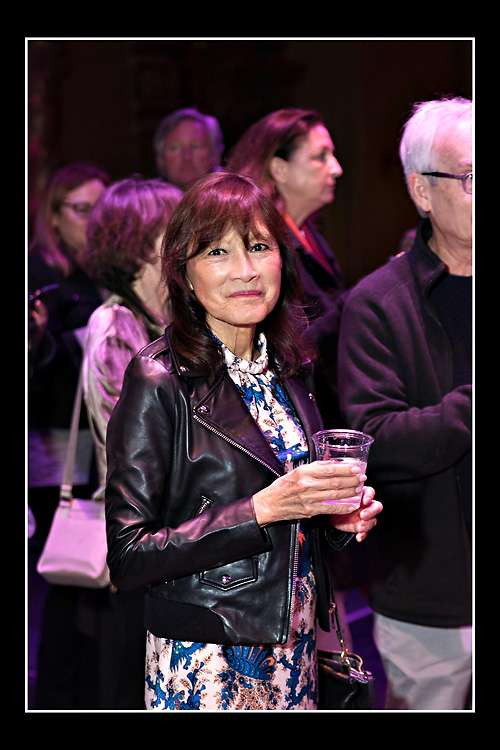 Director Freida Lee Mock at the reception held in her honor by CASCADIA International Women’s Film Festival in 2019. Photo by Ashley Suloway-Baker.

As the opening credits rolled, I instantly recognized that of one of the executive producers who was the 2019 Honored Guest at CASCADIA International Women’s Film Festival, Freida Lee Mock. When I contacted Freida, herself an Oscar-winning documentary director, to tell her that I saw her credit on the film. She quickly responded to say that this film is her first as an executive producer and she was extremely proud of it. She also suggested I drop by one of the donut shops featured in the film and sample their donuts especially since I planned to be only five minutes away from it at the appointment the next day.

The shop Freida told me to visit was DK’s Donuts and Bakery in Santa Monica. Never one to pass up a good recommendation or a donut, I headed over to find the shop after my lunchtime meeting. It was exactly as Freida said, only a five-minute drive from the restaurant where I had lunch.I pulled into the corner parking lot where the donut shop stood. People were coming and going carrying out bright pink boxes full, I assumed, of DK’s signature pastry. DK’s, like the other shops that Ngoy launched, is family-owned and first opened 41 years ago. The shop is featured in the film, along with its owners, who got started with Ngoy. Today, it’s owned by Sean and Mayly, the son and daughter of the original owners, Lee and Kong Tao.

The aproned man behind the counter was ready to serve whatever I selected. He knew exactly what movie I had seen.

“Can I help you,” the masked man wearing a white apron asked.

“I saw the movie,” I said without mentioning the title.

“Oh, how’d you like it?” he said. He seemed to know exactly what film I was referring to.

Then came the big decision. Which of the many deep-fried rings of dough before me would I select? The chocolate frosted Devil’s food cake donut was an easy one. Dare I go further? Ah, why not live dangerously? After all, I don’t get to L.A. that frequently and didn’t know when I’d be likely to make another trip to this spot. I gave in again to another chocolate donut although the peanut butter cup donut was tough to pass up. I pointed to my choices. And I added two vegan donuts to take to my son and his girlfriend.

He placed my donuts gently into one of the brightly colored boxes. I carried my tasty treats to my car. As soon as closed by car door, I pinched off a section of the Devil’s food donut and popped it into my mouth. It was moist and delicious. Another pinch and another taste as I headed out the parking lot. This was repeated several times as I drove until I had devoured the entire thing before arriving back at my cousin’s home. 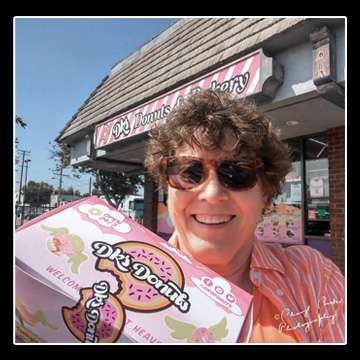 Me with my box of donuts at DK’s, which I sampled shortly after this photo was taken.

The remaining three donuts didn’t last long either and were equally as delicious. (I did manage to deliver the two vegan donuts intact to my son and girlfriend. They generously offered me a bite of each.) No wonder Ngoy’s donut dynasty flourished.

Upon returning home, I contacted Freida again and the film’s director, Alice Gu, to ask about screening the movie in Bellingham as a special screening for CASCADIA International Women’s Film Festival. “The Donut King” is now scheduled as an outdoor movie at Boundary Bay Brewery’s beer garden (all ages welcome) for Sunday, Oct. 3 at 6:30 p.m. Details are here on CASCADIA’s website. I also earned that the local donut shop, LaFeen’s, is owned by a Cambodian family!

CASCADIA is taking the opportunity to present a panel discussion that evening prior to the film about the contributions Asian Americans, like those in the film, are making to our country and the ongoing problem of attacks against them. Freida has been an active participant in The Action Project, a grassroots group of Asian American Academy and Emmy Award-recognized creatives and leaders in entertainment and other fields, formed to help stop violence and discrimination against Asian Americans and to share their stories. Baozhen Luo, a professor of sociology at Western Washington University, will lead the discussion on October 3 with Shing Liau and Truc Thon and the audience.

If you live in Bellingham (and are fully vaccinated as the festival requires for entry), I hope you’ll attend. It’s quite possible that donuts will be part of the evening too! 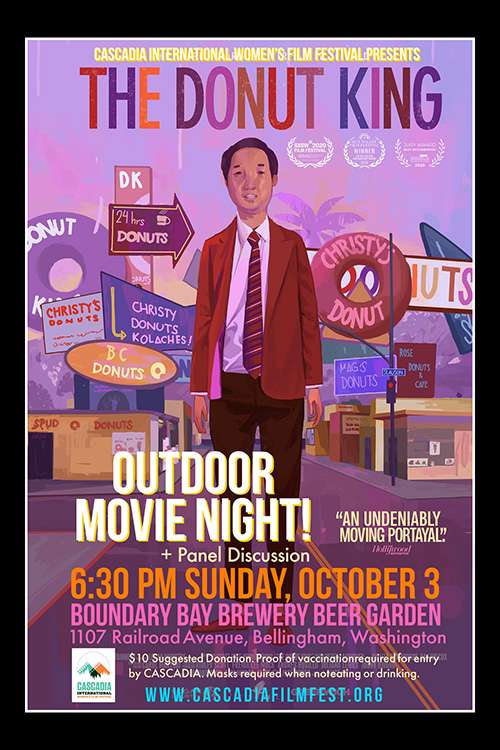