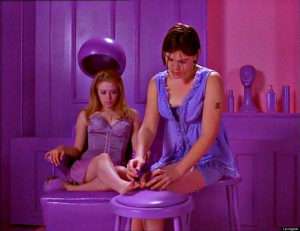 A scene from Jamie Babbit’s 1999 satirical comedy film, “But I’m a Cheerleader.” Sponsored by Paul McMullen.

Megan considers herself a typical American girl. She excels in school and cheerleading, and she has a handsome football-playing boyfriend, even though she isn’t that crazy about him. So she’s stunned when her parents decide she’s gay and sends her to True Directions, a boot camp meant to alter her sexual orientation. So starts “But I’m a Cheerleader.”

Western Washington University and CASCADIA team up to present “But I’m a Cheerleader,” Jamie Babbit’s over-the-top satirical comedy Friday, May 14, 9 p.m. to 11:30 p.m. at the Lincoln Creek Park and Ride, 800 Lincoln Street. Tickets are on sale NOW and are not included in the price of festival passes and must be purchased separately through WWU here. General Admission: $20 per car, Students: $5 per car. The film is also sponsored by Paul McMullen.

The film, released in 2000, just celebrated its 20th anniversary. “I was very excited about doing my first feature, but I was nervous because I had really big ambitions,” Babbit told Variety in a December 2020 interview. “One of the fun things about the 20th-anniversary release is I was able to look back at the footage and see scenes I had always loved that I cut out.” Watch the film trailer here.

Robin Cloud’s short film, “2 Dollars,” an official selection in CASCADIA’s 2021 festival will screen before the feature that evening. It is one of five films in CASCADIA’s Comedy Collection program. Cloud’s film focuses on a black queer masculine-of-center artist, Syd, who deals with the daily slights from ignorant co-workers, an oblivious boss, and a killer workload. Louise, a gambling-addicted coworker, pressures Syd into contributing to the office lotto pool. Watch the trailer here.

Syd sits impatiently while a co-worker applies a bit of lipstick to her in a scene from Robin Cloud’s “2 Dollars.”

Passes and Tickets on Sale NOW!

Give Mom a dinner and the movies for Mother’s Day with CASCADIA! Select a pass to this year’s festival, May 13-22, and treat her to dinner during the festival with special offers for our pass holders from one of our festival’s featured restaurants!

All-Access Passes include all 27 films as well as the Directors Party, director interviews, panel discussions, and festival lobbies for only $60. Three-Pack Passes allow you to select any combination of three programs, short film, or features for $35. Students passes for those with a valid .edu email address are $35 and include access to all the films, interviews, panel discussions, and virtual festival lobbies. Individual tickets for the film programs will also be available for $12 each. All passes and tickets are on sale NOW. May 1.