This article written by John Haworth comes to us from the Americans for the Arts blog.  John is a friend of the festival and is Senior Executive Emeritus Smithsonian Instituition/NMAI, Smithsonian’s National Museum of the American Indian. He is a member of the Cherokee Nation of Oklahoma.

Shining a Spotlight on Native American Media and Mediamakers

Vision Maker Media (VMM) is a national Native American arts service organization which supports the creation and distribution of Native American films and other media for public television, radio, the internet, and screening venues, including cultural centers and museums. The work VMM does is, as their name suggests, visionary. In giving voice to and advocating on behalf of Native media artists, they are an important player in the broader cultural sector.

This organization is the primary source of media by and about Native Americans. Through its work with producers, Vision Maker Media develops, produces, and distributes programs for all public media—television, radio, podcasts, and streaming programs—and supports training to strengthen the Native American media field. Their work is both informed and strengthened through partnerships with Tribal nations, Indian organizations, and Native communities. This Native perspective is core to VMM’s success in disseminating Native media with a broad national audience and a global marketplace. 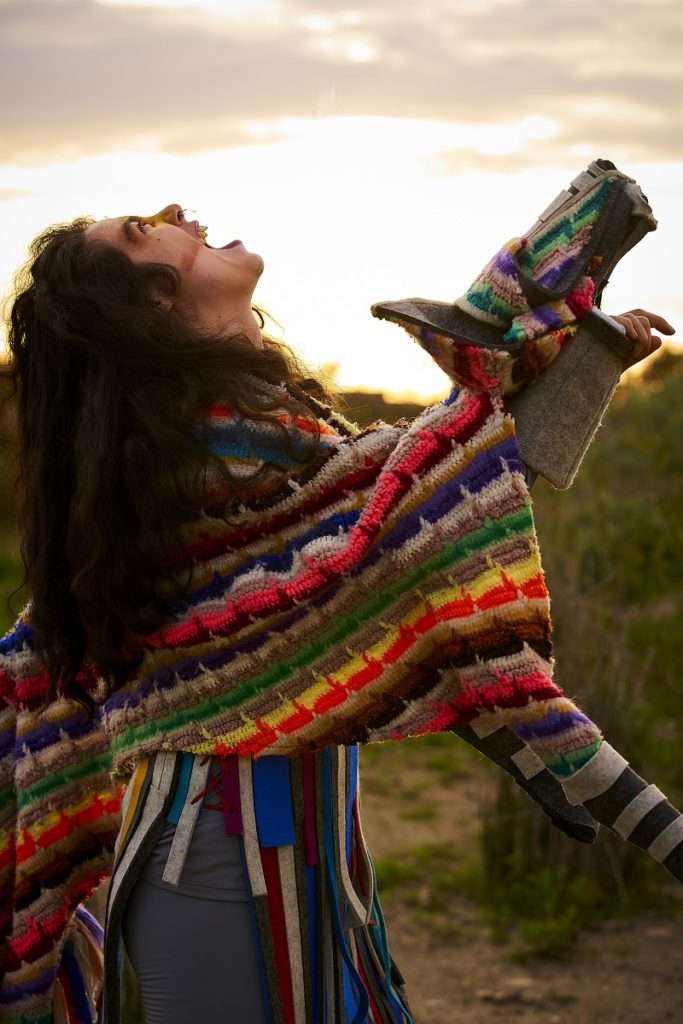 Micaela Tobin as Coyote in “Sweet Land,” from KCET’s
“Southland Sessions” series. Photo by Casey Kringlen for The Industry.

VMM’s deepest commitments are to helping create authentic voices and stories from an American Indian perspective and focusing on how Native people are portrayed in the media. Their support of Native media programming translates into having Native perspectives, tribal voices, and images seen and heard by an audience of millions of viewers and listeners. VMM also expands opportunities for filmmakers, writers, and other individual artists by supporting mentorships, centering Native American media makers telling their own stories at the heart of this important work. Native content and images enrich all of us by providing a deeper understanding of Native culture and their cultural contributions. In a world filled with stereotypes (including racist mascots, over-sexualized portrayals of women, and inaccurate stereotypes in commercial movies), VMM vitally addresses important social and cultural issues.

With sponsorship support from the Cherokee Nation Film Office, Vision Maker Media is currently celebrating its 45th anniversary with an active yearlong schedule of free “commUNITY” events, including thematic online film screenings, virtual programs, and much more. In marking this anniversary, VMM will honor its longstanding partnership with Nebraska Public Media, and later this year, will present the Frank Blythe Award (named after their founding director) in a special ceremony in Lincoln.

Following with great pride in the footsteps of her father, Francene J. Blythe-Lewis (Diné, Sisseton-Wahpeton, Eastern Band Cherokee) was named Executive Director of VMM in summer 2020. In describing the challenges of the last year and a half, Francene uses the Navajo word “Hózhó” which refers to the Navajo life practice that encompasses harmony and balance within and surrounding us. For Francene, taking on this new national leadership role and moving back to Nebraska makes her move a special homecoming. She is a gifted leader with extensive experience working with grass-roots tribal organizations, individual artists, and key arts and philanthropic leaders.

“I have longed to return to Indigenous storytelling through film and media. Our stories are so crucial—always have been—to the vast history of world knowledge, as well as to posterity.” —Francene Blythe-Lewis

It is important for cultural leaders and individual artists to know the work of organizations like Vision Maker Media. This is of special urgency given the current challenges faced by local and regional arts agencies: Leaders in the cultural sector simply must have a broader understanding of social and economic justice issues. As our field does more to support civic engagement and informed public dialogue about these key issues, local arts leaders have the opportunity to assume leadership roles on the complex challenges in our communities—promoting equity, addressing the climate and other issues, and promoting civic literacy about the issues we face. As arts administrators and managers, it is not enough to be informed about the issues—we need to know how to communicate effectively with broader, more diverse publics that we serve. Local arts agency leaders must understand these issues on ever deeper levels as they develop meaningful competitive grant review processes and find effective ways for arts organizations to take central roles in public discourse.

In support of the performing and visual arts, and arts education programs related to these artistic disciplines, many local arts agencies miss the boat in terms of advocating for and supporting media artists and organizations. Indeed, many museums and arts centers have active film screening programs; however, there are tremendous opportunities for local arts agencies to become more familiar with the discourse related to media. The media arts are especially important tools for addressing many complex civic and global issues, and VMM takes a proactive role assuring that a broad range of works reach ever wider, more diverse audiences. A timely example is the documentary film When They Were Here, made by the Blackfeet/Shoshone filmmakers Ivan and Ivy MacDonald (who are brother and sister), which examines the horrific issues of missing and murdered Indigenous women and the devastating results upon Native families and communities.

Many of the works supported by VMM put complex issues into sharp focus, while others use moving images to tell stories about Native people and their communities. The feature documentary Sisters Rising (Tantoo Cardinal is the Executive Producer) tells the story of six Native woman dealing with violence and addressing legislative protections. Paul Csicsery’s film Navajo Math Circles reveals the challenges of education in a largely rural, tribal educational system. Anne Makepeace’s film Tribal Justice teaches viewers about the tribal courts around the country, and touches on serious challenges including the school-to-prison pipeline. These are just a few examples of works that encourage deeper discussion and thoughtful community engagement.

Because diversity and equity work has become such a key issue for local, regional, and state arts agencies and philanthropic organizations, there are tremendous opportunities for developing greater staff capacities and competencies in this area via institutions that bring diverse points of view to the national discourse. Along with Vision Maker Media, the field organizations in the National Multicultural Alliance—Center for Asian American Media, Latino Public Broadcasting, Black Public Media, and Pacific Islanders in Communications—bring diverse perspectives and authentic stories to public media. In Native American media, the Sundance Institute’s commitment to supporting Indigenous artists strengthens the field and the National Museum of the American Indian’s Native Cinema Showcase is an annual celebration of the best in Native film. Activism lies at the heart of all the stories.

On a more personal note: In the early 1970s I worked as Associate Director for the Arizona Commission on the Arts; this state arts agency made grants, but also organized statewide touring performing and visual arts programs. I was assigned to help produce a summer arts festival in metropolitan Phoenix primarily focused on presenting performing arts programs. For me, the best part of the assignment was helping develop a film festival that included not only classic feature films, but independent documentaries and animation films. In the early stage of my career in the arts, what a great experience it was work with a lively group of community volunteers who were both informed and opinionated about world of film and filmmakers. In the years since, I have come to appreciate on a deeper level the significant cultural contributions independent films and filmmakers have made. Especially during this time of major social upheaval, with the fierce challenges of climate change, race relations, and global political conflicts galore, the arts play a central role in bringing these issues to light. The work of organizations like Vision Maker Media lends depth and understanding to the challenges surrounding us.