Students in Kari Lerum‘s “Girls on Film” class at the University of Washington, Bothell attended this year’s film festival virtually. Lerum, an associate professor in the School of Interdisciplinary Arts and Sciences at UW Bothell, talks about why she created the class in an article that appeared in the July 9th issue of the campus newsletter. 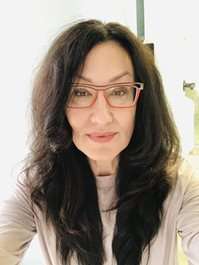 “Films reflect and create central, cultural assumptions about gender across the life course,” Lerum says. “The class is about the study of film–images, ideals, narratives and thematic emphasis create an opportunity to understand shifting cultural norms about gender.

“That’s what I want my students to recognize.”

Lerum’s class attended this year’s festival virtually to view two of CASCADIA’s feature films and one of its short film programs then participated in a discussion afterwards with director Melissa Lowery of “Black Girl in Suburbia,” CASCADIA’s Executive Director Cheryl Crooks and Artistic Director Rana San of Northwest Film Forum.

Students also wrote a commentary about the film, “Black Girl in Suburbia.” We’ve published two of them here. Lerum’s class screens films that explore the cultural and institutional implications of coming-of-age narratives 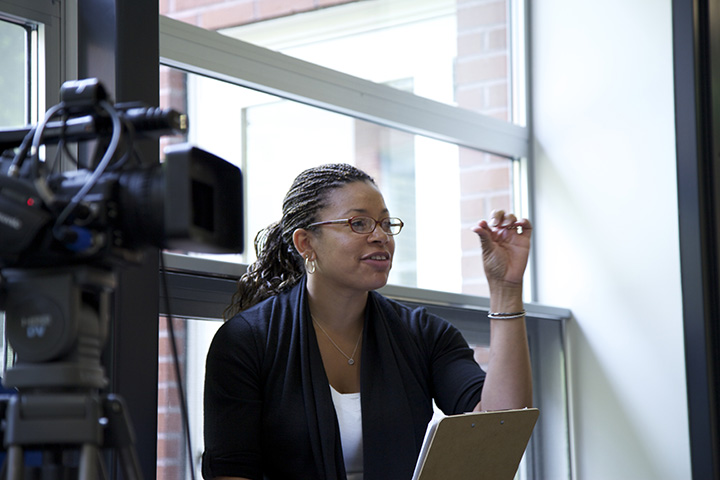 “Black Girl in Suburbia” director Melissa Lowery on the set during filming.

Black Girl in Suburbia was a documentary that was meant to bring a new perspective to the world. Melissa Lowery’s film exposed the harsh realities that come with living and growing up in a predominately White area. In the film, she was able to capture the many different experiences that could prove to be alienating for Black girls. Melissa also shares her personal story of growing up in a White neighborhood and she discusses the blatant racism and micro-aggressions that occurred as she was growing up. The film contains interviews and conversations with Melissa’s daughter, teachers, and Black female students. She interviews various girls to ask about their experiences living in a White neighborhood.

This film was significant to me because I am someone of mixed race ( Black and Korean) who grew up in a predominately white/ Jewish neighborhood. While there were only 5 black students at my school, there was basically no one who really looked like me at my school. At times, it was really difficult to feel a sense of belonging in a White school. To some, my facial features present someone of Asian descent and not really of someone that is Black. There were many times where people were ignorant to the fact that I was Black and told me what race I was and was not. I also found myself being picked for my larger nose, which was similar to my Black father’s. I was insecure about my appearance from middle school until my junior year of high school. I was insecure about everything, whether it was my wide hips, my nose, or my thick curly hair. My curly hair experience was so traumatic for me as well. I would chemically straighten my hair regularly and straighten it every day to blend in with everyone. 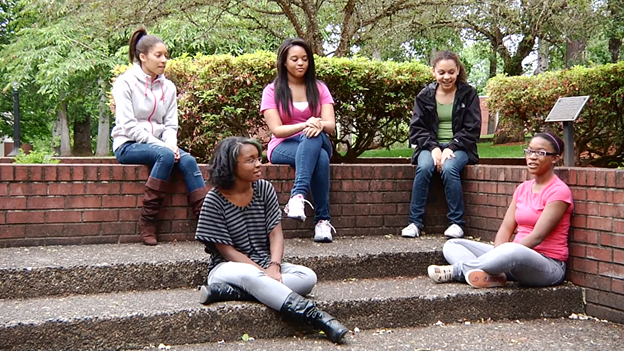 A scene from Melissa Lowery’s documentary, “Black Girl in Suburbia.”

Thinking back to the movie, I definitely found a connecting point to experiences that I’ve had where White classmates were ignorant or committed micro-aggressions. I also resonated with some of the experiences that many of the female students and other interviewees shared in the documentary about dating. Some of the girls mentioned that they weren’t seen as desirable by other males. Some mentioned how Black male students would usually like White girls. I think that what they said is true. The white students didn’t really seem interested in me and the Black students only dated White girls. For all of my dances at school, I was never asked—that really wrecked my self-confidence.

I wish I would’ve seen Black Girl In Suburbia sooner when I was growing up. I think I would’ve been a lot less insecure about myself. I think this film allows other Black students not to feel alone in their environment. Instead, it gives Black students a chance to see that this is not just happening to them in their neighborhoods–it happens to Black students everywhere. The film gives a point of relation and opens up the issues that are not really heard or talked about. I think that this film is important and I would personally recommend it to family or friends that are in high school or middle school.

I watched the film, Black Girl in Suburbia, and I felt it was a very eye-opening film. This film showed girls of color and their experiences living in a suburban environment. The film showed many girls of color and we heard experiences that they had gone through as they grew up. Each of the stories were from the girl’s personal experiences and in many cases, you could still see the effect through their nonverbal expressions, for example, their facial expressions and body language. After watching this film my eyes were open to experiences I have never personally gone through, being that I am a White woman. I remember one of the girls specifically, and the way she talked about the fact that because she was mixed she never quite felt excepted by White or by Black people. She stated that she often would hear from Black people as well that “you’re not Black” and how hard it was to not be accepted for who she was. I believe the purpose of this film was to bring light to the fact that girls of color go through many hardships, but that girls who are mixed have a hard time as well because they feel they aren’t accepted anywhere or by anyone. This film is important, because like it did for me, it is eye-opening to see and gives awareness to people who may not personally be aware.