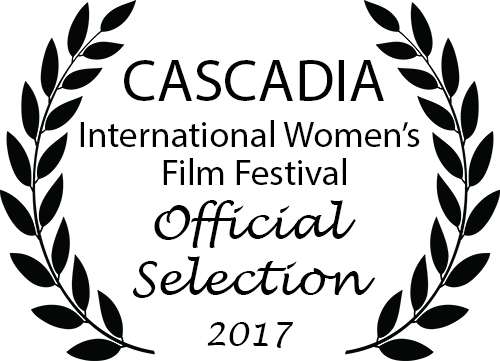 CASCADIA’s Official Selection 2017 of Women-directed films was presented April 20-23 at Pickford Film Center and Mount Baker Theatre in Bellingham, WA. Our FESTIVAL SCHEDULE was full of education, panel discussions, Q & A, and the exceptional films below.

Having won an Audience Favorite Award at the Cleveland Film Festival, Big Sonia is an inspiring story about a Holocaust survivor who is tiny woman with a huge personality. We see her face one more life challenge when her business receives an eviction notice from a dying shopping mall in Kansas City.

UnSlut features conversations with those who have experienced the life-altering effects of sexual shaming, but also offers immediate and long-term goals for personal, local, and institutional solutions.

This award-winning thesis film from the School of Visual Arts in New York follows a young woman who believes she’s followed home by a monster after leaving a club. Is it real?

The Women Who Run Hollywood, a Feature Documentary by Julia Kuperberg and Clara Kuperberg, France

There were more women directors and producers in powerful positions before 1920 than at any other time in film history. The documentary examines the outstanding work of these women and the reasons why they have been largely forgotten.

A young woman challenges traditional customs and family pressure regarding inheritance, marriage, and her right to determine her own destiny.

The traditional game of Sla-Hal played annually brings families and tribes together for a day of fun, competition and culture building.

In 2014, a full-time mom took on an Olympian, two pro-athletes and a former junior champion in joining hundreds of marathon runners challenging the 3022 feet of Seward’s Mountain in Alaska’s oldest and most dangerous footrace.

Giovanni and Ernesto embark on an adventure across the Italian countryside with a child’s dream of a new life. As the reality of their situation begins to take hold, the myth of this ‘City of Dreams’ begins to crumble.

The compelling Short Drop follows a lonely old man who is mistaken for a cab driver while driving around the bustling streets of Port of Spain. Reluctantly he agrees to take the passenger and ends up with a variety of wonderful characters in his car.

Set in Sweden, a brother and sister in their mid-teens are left home alone in Syskon while their parents are off to settle some marital issues. The two siblings, as it turns out,  have their own issues to resolve.

Newly restored for its 20th anniversary, The Watermelon Woman director Dunye plays a version of herself as a video store clerk and fledging filmmaker who becomes obsessed with making a film about a black actress from the 1930s known only as the “most beautiful mammy.”

A Horatio Alger story about the life of architect, Lutah Maria Riggs (1896-1984), a determined young Midwest woman who overcomes all odds to ultimately design many of the loveliest, most original buildings in Santa Barbara, CA.

Filmed on location in Cuba, New York filmmaker Ellen Silverman explores the relationship of four elderly Cubans to the homes they have lived in all of their lives, and which keep them rooted in the past, present and future.

Grumpy Does Repairs by Radostina Neykova and Sofiya Ilieva, Bulgaria

In  Afghanistan,  the “batchas”  are young male  prostitutes who live  under the protection of  a master in their house where they are trained to dance dressed as a girl for a men’s audience.

Fall Down Seven Times, Get Up Eight: The Japanese War Brides by Lucy Craft, Karen Kasmauski and Kathyrn Tolbert, USA/Japan

Atsuko, Emiko and Hiroko were among tens of thousands of Japanese women who married their former enemies after World War II. They landed in 1950s America  knowing no one, speaking little English and often moving in with stunned in-laws. In brutally honest conversations with their daughters, they reveal the largely untold story of the Japanese war brides.

The Founders, a Documentary Feature by Charlene Fisk and Carrie Schrader, USA

In 1950, thirteen amateur women golfers battled society, finances and sometimes even each other to stake their claim to become professional sportswomen by creating the Ladies Professional Golf Association (The LPGA) – and establish a lasting, global sporting legacy.

About Love, a Narrative Feature by Anna Melikyan, Russia

Love is the subject of this sophisticated “Fellini-esque” anthology featuring famous Russian actors, from Vladimir Mashkov to stars of a younger generation, telling five distinct stories with five separate protagonists.

The Dumb Girl of Portici, a Silent Film Feature by Lois Weber, USA

The first blockbuster film directed by a woman, this brilliant, restored 1916 film — with the dazzling new score by dance composer John Sweeney — will give today’s audiences a chance to experience the energy, the expressive face, and the grace of the great ballet dancer and choreographer Anna Pavlova.