Seven years ago, the idea of a creating a film festival to focus on the work of women directors began to be seriously explored by a small group of individuals here in Bellingham. How to do it was another matter. One of those to whom we turned for advice was the programmer for the Pickford Film Center, Michael Falter.

Falter was a key player in the success of our city’s independent non-profit art house seeing it grow from a small 60-seat theater into a three-screen venue with more than 5,000 members scattered throughout the area.Falter started his career with the Pickford in 2002 while still teaching a film classes at Whatcom Community College. He began with programming the Pickford’s singular theater but with the opening of the new theater and two more screens, his job became more demanding.

In 2007, the Pickford introduced its now highly successful Doctober festival featuring a month of documentary films. The idea of Doctober grew out of True/False West, a regional collaborative effort with True/False in Missouri and the Pickford, which happened only once in 2006. Falter had helped to program True/False and attended the festival to introduce films. Doctober has become one of the most anticipated annual events at the Pickford and now takes Falter months of curating and administrating as well as a great deal of time for the rest of the PFC staff. 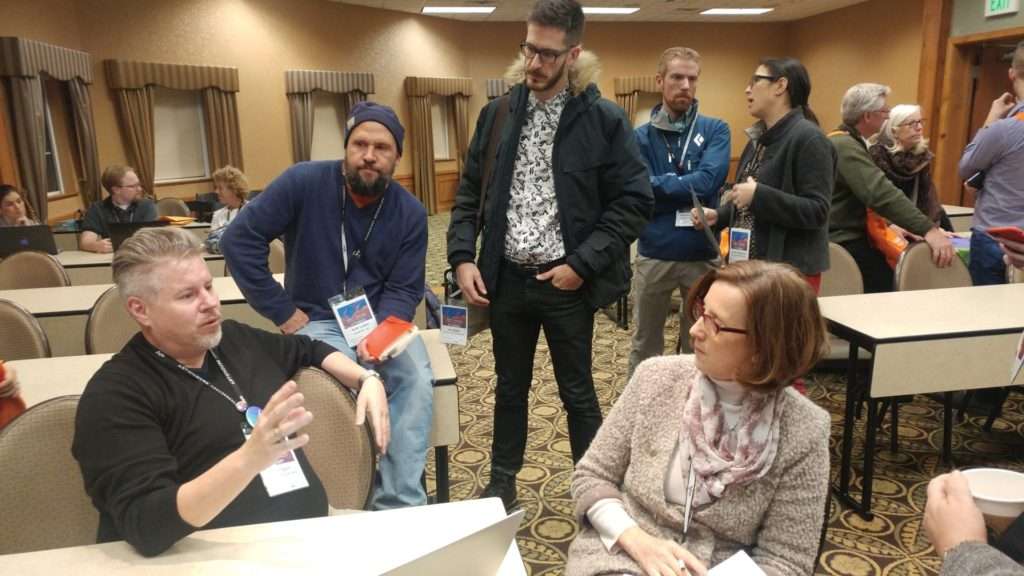 So when it came to how to launch CASCADIA, Falter was one of the first to be consulted. Meeting with him on more than one occasion, Falter graciously answered questions about how to run and manage a film festival. He was generous with his time and expertise and offered to help any way he could those of us involved. From the outset, CASCADIA’s founding board agreed that the Pickford should be the primary home for the festival as it was located in the city’s Arts District, had state-of-the-art theaters and had a strong following of film goers. From the first, Falter was excited about the festival’s mission and supportive of bringing it into the Pickford. He was also full of suggestions of others we needed to speak with and directed us to resources, such as the Film Festival Alliance, that could be helpful.

By the time the idea of our festival came about, Falter was already recognized nationally among the industry for his programming abilities and his leadership. He and his wife, Susan, organized Art House Convergence (AHC)), an annual conference for independent film theaters like the Pickford as an outgrowth of a singular invitation to celebrate a Sundance Institute anniversary back in 2006. AHC has developed into a major industry event with theater, film festivals, film distributors and studios, filmmakers and other support companies. Falter shared his network with us and steered us to those who also would provide invaluable guidance. As a result, CASCADIA became a member of the Film Festival Alliance even before we staged our first festival. And we conferred with and attended other festivals in our region to learn how they did it.

For his part, Falter assisted in our developing a partnership with the Pickford that continues today. He made suggestions regarding programming and scheduling as we began to pull the first festival together. He aided by putting us in touch with distributors and even facilitated securing some films by agreeing to pick up some festival films for runs at the Pickford after the festival. He also found room for CASCADIA to ‘try out’ the idea of a festival devoted to women directors within the 2015 Doctober by presenting a program of films directed by women. Based on the enthusiastic reception of these initial screenings, the festival’s founding members decided that CASCADIA could be a viable event. CASCADIA has presented or sponsored a female-directed documentary film in Doctober ever since.

In 2014, Falter moved from Bellingham to Florence, Ore. to open his own independent art theater but continued to program the Pickford from afar. There are those who credit much of the success of the Pickford with Falter’s programming sensibility. This month, after 20 years as the Pickford’s programmer, Falter is saying farewell.

Earlier this month,, a small number from the Pickford’s past and present staff, along with a few personal friends and others, like myself, gathered at the Pickford to express their gratitude to Falter for his years of outstanding work. The Pickford’s current Board President, Gary Washington, thanked Falter for his years of hard work and contributions to the theater. Mayor Seth Fleetwood presented him with a Certificate of Recognition from the city. Those in the audience that evening weren’t expecting this send off ceremony; yet they were direct beneficiaries of the man being honored as they had come to see one of the films that Falter had selected for Doctober.

The Pickford appears to be in good hands with Melissa Tamminga, who, like Falter, has been teaching film classes at Whatcom Community College and has written extensively about film. Falter has stayed on during the Doctober festival to help with the transition. But to be sure, Falter will be missed.

CASCADIA, and myself in particular, is grateful for all he has done to help CASCADIA reach the level of a full fledged film festival rapidly gaining national attention in a just few short years. We are fortunate to have had the benefit of his knowledge and cooperation. We extend our best wishes for his next endeavors as a programmer and theater owner. And even though he will not longer be programming the Pickford, we will stay in touch.