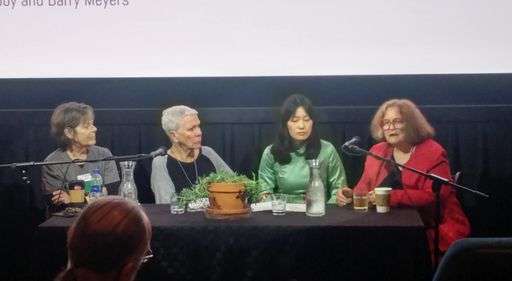 In 2019, CASCADIA presented a panel discussion during the festival titled: Inside the Minds of the Reviewers. Some of our short film submission jurors talked about what they look for in viewing our short films. CASCADIA Board Member Sheila Goodwin moderated (left) with panelists Claudette Sutherland, Los Angeles writing coach and actress; Joyce Yang, Hong Kong film critic and curator; and RL Widmann, Washington D.C., film scholar and former professor.

CASCADIA’s regular submission period is now open for short films for its 2022 festival through Film Freeway. We’re excited about the films we’ve already received and look forward to seeing more as we continue the submission process through November 20.

We’re very proud and appreciative of the 30 plus short film jurors who donate their time and expertise to help us select our short film semi-finalists. Our jurors have all been invited to participate based on their knowledge of film. Most are film industry professionals and are directors, producers, writers, actors, cinematographers, or editors. Others are film critics, programmers, scholars, professors, archivists, or avid film festival fans who have attended or juried for not only our festival but others.  Many are film school graduates.

About one-third of our jurors are located in our immediate area, another third or more are based elsewhere in the United States such as Los Angeles, New York, Washington D.C., Denver, and elsewhere. Still another group lives in Europe or Asia. They are both women and men of all ages and ethnicity. We believe this mix of people helps to ensure that our festival is truly ‘international’ in scope.

Many of our short film jurors have been part of our festival family since our first festival in 2015. Some have taken a year off but remain on our list so that they can return next year. This allows us to bring in new jurors who can offer a fresh perspective and gives our seasoned jurors the time off they may need to attend to projects that need their attention in their personal and professional lives.

Each short film received is assigned to three jurors. We attempt to spread the films out among our local, national, and international jurors and try to maintain a balance of both women and men viewing them. Those tasks fall to our wonderful submissions coordinators who stay on top of the films that come in and respond to questions from filmmakers, producers, and distributors.

Films are considered and critiqued in five areas that we regard critical to the making of a good film: direction, writing, originality, and creativity, sound, and cinematography. Films with the highest scores advance to the final selection committee for their review and determine which films will be accepted into the festival.

We give all our films serious consideration because we realize the time, work, passion, and money filmmakers pour into the making of them. We want to respect their efforts while, at the same time, realizing we cannot accept every film into the festival. CASCADIA works hard to maintain the high level of standards that we set for ourselves from the first festival and it is to the credit of our exceptional short film jurors that we’ve been able to do so.

We invite anyone with a short film, 25 minutes or less, directed by a woman to submit to the festival whether or not it’s your first film or one of many. We require that films submitted for the 2022 festival have been completed or released no earlier than October, 2020. Films that have already appeared in a festival in our immediate area will be disqualified.  We ask that the films also be closed captioned so that if selected for the festival, they can be fully accessible. Films may be submitted on Film Freeway here.

We look forward to seeing your film!