The film industry lost another trailblazing giant last week when actor, film director, civil rights activist, author, ambassador, Sir Sidney Poitier died at age 93 on Friday. He was a groundbreaking international film icon whose life, both onscreen and off, stands as an example of strength, passion, depth and integrity. 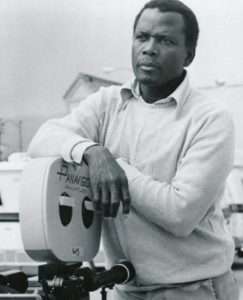 ASU has named its film school for Sidney Poitier.

Poitier starred in more than 40 films, directed nine, and wrote four. He became the first African American to win the Academy Award for an honorary Academy Award “for his extraordinary performances and unique presence on the screen and for representing the industry with dignity, style, and intelligence.”

In January, 2021, Arizona State University (ASU) renamed its film school as The Sidney Poitier New American Film School. “Sidney Poitier is a national hero and international icon whose talents and character have defined ethical and inclusive filmmaking,” said Steven J. Tepper, dean of the Herberger Institute for Design and the Arts at ASU. “His legacy will serve as a guide and inspiration for our school and the thousands of film students we educate.”

In November, Cheryl Boone Isaacs, former president of the Academy of Motion Picture Arts and Sciences, was announced as the film school’s founding director. CASCADIA International Women’s Film Festival honored Boone Isaacs in 2018 for her overall career in the film industry, her contributions to the industry and, in particular, her contributions to women in the industry.

She assumed directorship of ASU’s three-campus film school January 1 and will lead it from the ASU California Center as well as from Tempe and from Mesa, home to a new118,000-square-foot, state-of-the-art film and immersive media center.

Boone Isaacs brings a depth of experience and leadership in the film industry to her position at The Sidney Poitier New American Film School. She has worked on more than 300 movies and served four terms as president of the Academy of Motion Pictures Arts and Sciences. She served as president of the organization from 2013–17, the first Black person, first person of color and third woman elected to the post.

At CASCADIA’s 2018 festival, Cheryl Boone Isaacs was Honored Guest and participated in a ‘conversation’ with interviewer Deb Slater for our audience. Watch the conversation here: https://youtu.be/mGme0ftr-xk

During her tenure as president, she helped create sweeping and ambitious changes within the Academy membership, including the goal of doubling the number of women and ethnically underrepresented members in four years.

Boone Isaacs said she was drawn to the ASU position because of its emphasis on “representation, and the idea of inclusion, not exclusion.

“Sidney Poitier — the man, the icon, the legend — is my North Star who exemplifies determination, passion, professionalism and excellence,” Boone Isaacs said in an official ASU press release. “I am honored to be part of his legacy and to impart his ethos to future generations of storytellers.”

It’s a big job but we know Boone Isaacs is up to the challenge. She looks forward to building the newly established film school with an eye to the future, with the goal of empowering visual storytellers across entertainment platforms. CASCADIA looks forward to exploring ways to work with Boone Isaacs and ASU, as well as other film schools across the country, to continue to provide  an outlet for films made by women students as part of our future festivals.