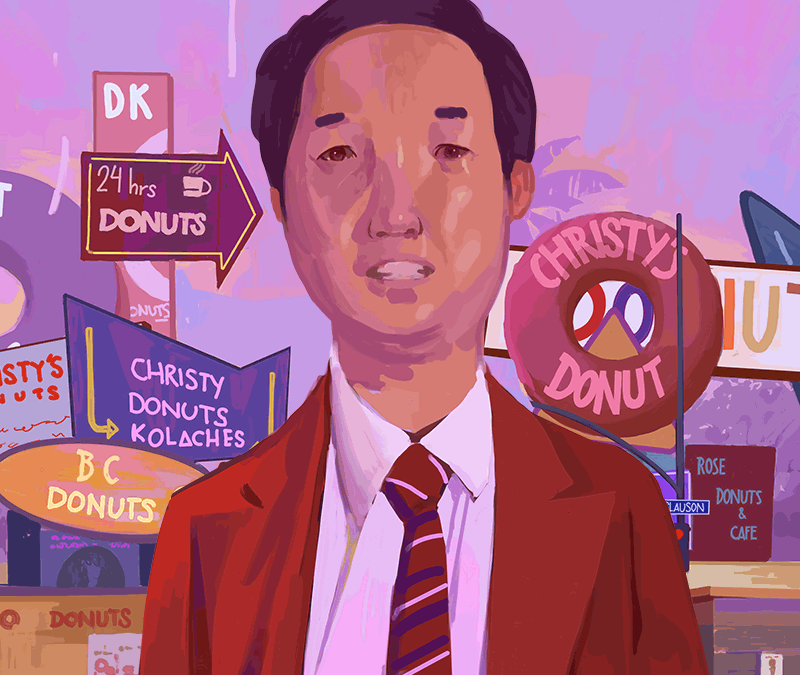 As an LA-born and raised child of Chinese immigrants, I grew up like any other normal American kid––I had loads of friends, took ballet, tennis, piano, you name it. I went to sleepovers, ate hamburgers, and pursued the career of my dreams.

I discovered that there are an estimated 5,000 independent donut shops in California and Cambodians own up to 80% of them. I became fascinated by the irony that one of the most American foods, the donut, is nearly entirely made by Cambodians west of the Mississippi.

I found the “Donut King,” now living in Cambodia, and two months later I was there filming. Ted’s story was much more than I had initially imagined – as a man who escaped the Khmer Rouge and genocide, arrived as a refugee at Camp Pendleton (a military base in Southern California) and then by virtue of hard work he became a millionaire just three years later.

Though my parents were not shop owners, I instantly connected with the immigrant story of my parents’ own journey from China, fleeing the Communist Revolution. Through my travels, I came to realize that we all, collectively, are not so different from one another. We want the same basic things––to be loved, to feel secure, to have food, opportunity, and to be able to provide.

I couldn’t ignore the parallels regarding immigrants/refugees in 1975 and 2019. I couldn’t ignore the difference in attitudes and leadership between then and now. While making this film, I couldn’t have felt prouder to be an American and proud of American ideals, or rather, what I know American ideals to be. In a time of such divisiveness, I wanted to present a story of the American Dram and togetherness. I hope audiences have fun watching. The film — after all, it is about donuts — but it also gives a human fact to refugees and dreams that can be realized, if just given a chance.

A spoonful of sugar makes the medicine go down.

Upon first glance, “The Donut King” appears to be a documentary about a familiar, sugary, round pastry we all know and (mostly all) love. But, it’s about more than that. It’s with intentionality and love that I crafted this Trojan Horse.

Donuts are ubiquitous. They’re in pretty much every strip mall. Who even thinks about them? Who makes them? Well, if you’re walking into a mom-and-pop donut shop on the West Coast, there is a very high probability that your donut maker was a Cambodian refugee.

While this is a story about a particular refugee, Donut King Ted Ngoy, who achieved the American Dream, this is story that is applicable on a global level. The refugee crisis is a global humanitarian problem. It is no secret that refugees find a difficult time finding acceptance and opportunity. The Donut King is a film that sheds light on American policy in the 1970s. As a military historian says in the film, “The world was watching.”

At the time, and even now, the world looks to America as the moral leader on how to navigate difficult situations, including situations of displaced persons. Refugees are looking for security. For countries and citizens hesitant to accept refugees, often looked upon with suspicion and hatred, The Donut King humanizes refugees and shows how they can thrive and become part of the community, if given the chance. The film is even more timely now, with xenophobia on the rise around the world.

Currently, in the wake of COVID-19 In America, we have seen a 900% increase in hate speech and a new wave of assaults on Asian Americans. This was certainly encountered in the 1970s, featured in the film. However, this one refugee from Cambodia, through donut diplomacy, changed the hearts and minds of communities, whom at the time, had rarely encountered any individuals from Asia.

With all the noise and clutter of sensationalized media, documentaries are the guiding voice on real storytelling for impact and change. A portion of the proceeds of the sale of “The Donut King” will be donated to Refugees International as part of our impact campaign. “The Donut King” joins Refugees International in its commitment to the protection of displaced people and will donate proceeds of any sale to help accomplish their work.